The History of Heathenry

The Properties of Norse Pagan Heathenry
Next

The Old Norse culture persisted during the Bronze Age, Iron Age, and into a period of time known as the Viking Age. The Viking Age lasted from 793 C.E. to 1066 C.E. and ended with the Battle of Stamford Bridge. This event marks the end of Old Norse civilization and the beginning of new civilizations such as the Normans.

Scandinavian territories were Christianized between the 8th and 12th centuries. Norse culture changed and many old pagan practices were lost as a result. What happened to surviving Old Norse customs varies between them. Many of them adapted. In some cases new practices, beliefs, and folklore rose out of mixing old paganism with Christianity. Much of them survived in family lineages, community customs, and regional superstition. But modern neo-pagan Norse Heathenry as we recognize it, specifically Ásatrú, didn’t appear until the 1970’s. This correlates with the founding of the Icelandic Ásatrúarfélagið.

American Norse Heathenry is unique in that most of it grew out of Odinism. Odinism is a form of Neo-Völkisch Heathenry, a white nationalist appropriation of Norse paganism that grew alongside Naziism. It was created by a few key figures beginning in the late 1800s and corresponds to various Germanic movements. When it arrived in the United States in the 1970’s, Odinism served as the far-right response to the largely left-leaning spiritual movements.

The origins of Odinism, and how it influences American Ásatrú today, is very important to be aware of. Norse Paganism is constantly fending off White Nationalist appropriation. A large part of that involves knowing what these influences are and where they came from. The development of Odinism is as follows:

Marked by a rejection of antiquity and classical models, this period in German history focused on revitalizing the German identity through art, philosophy, and culture.

Growing out of German Romanticism, the Völkisch Movement strove to create a Völk identity. This identity was rooted in antisemitism, ethno-nationalism, white supremacy, romanticization of a folk past, and anti-modernization. This movement gave rise to Nazi Germany.

Ariosophy is an “Aryan mysticism” pioneered by self-described “Wotanist” Guido Von List. List’s ideas were influential to the Nazi party.

Odinism is brought to the US

Else Christensen finalizes Odinism based on Mill’s work and brings it to the US, where it was taught and disseminated through the US prison system.

Odinism overlaps with Western Neo-Paganism to give rise to American Ásatrú. While not all forms of American Ásatrú are Neo-Völkisch, a few of them are.

While not all branches of American heathenry share this lineage, many US publications and cultural concepts derive from it. Keep in mind though that American Norse Heathenry, like all Heathenry, is decentralized, so not everything is inherently Neo-Völkisch. Additionally, new information appears about it everyday from increasingly reputable sources. Heathenry is a living spirituality, after all. It will experience refinements as time goes on and as Neo-Völkisch Heathenry continues to be rejected.

The Branches of American Heathenry 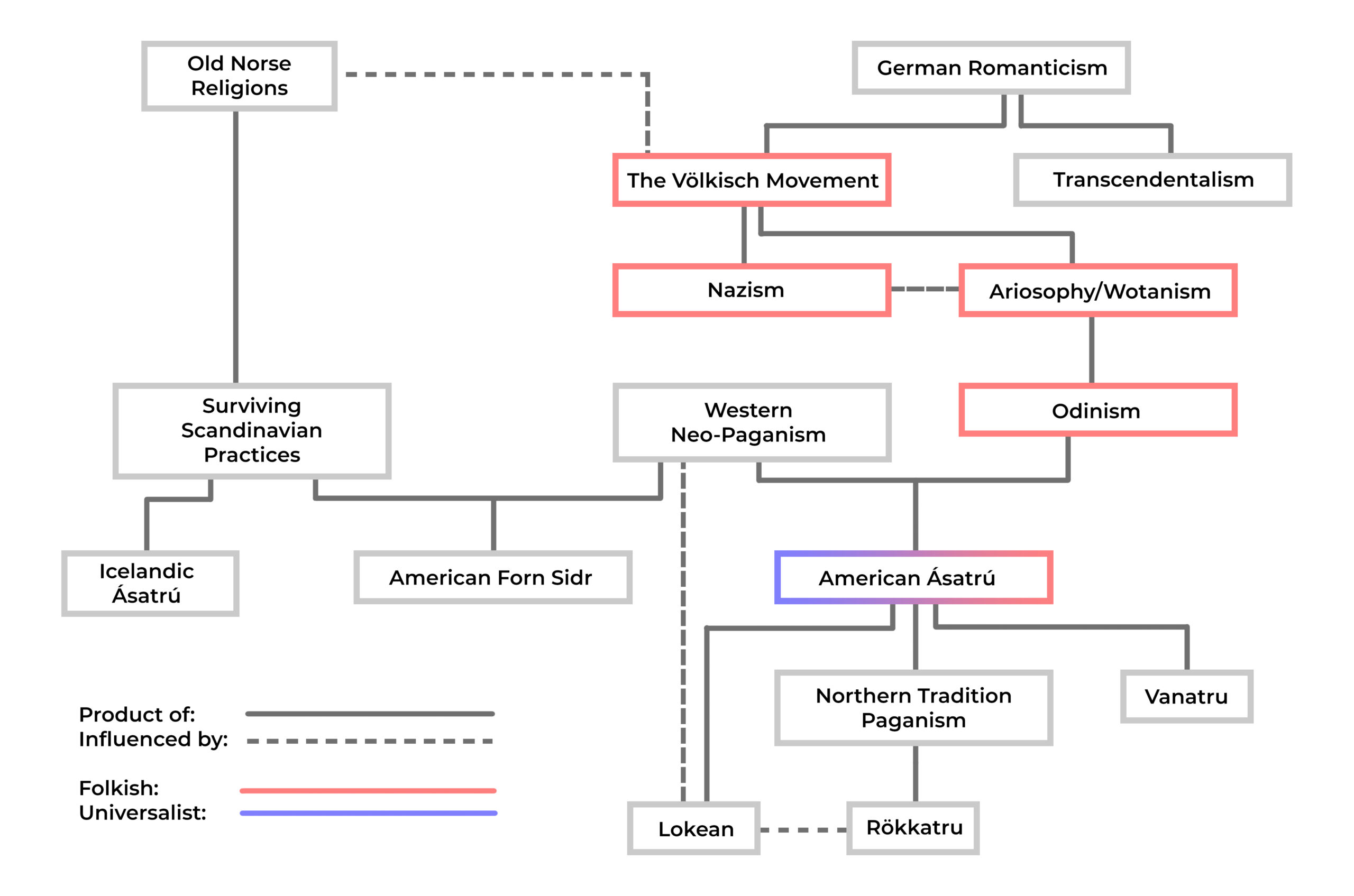 “Pagan Politics in the 21st Century: ‘Peace and Love’ or ‘Blood and Soil’?” by Michael F. Strmiska

The Properties of Norse Pagan Heathenry
Next