The Birth of Sleipnir 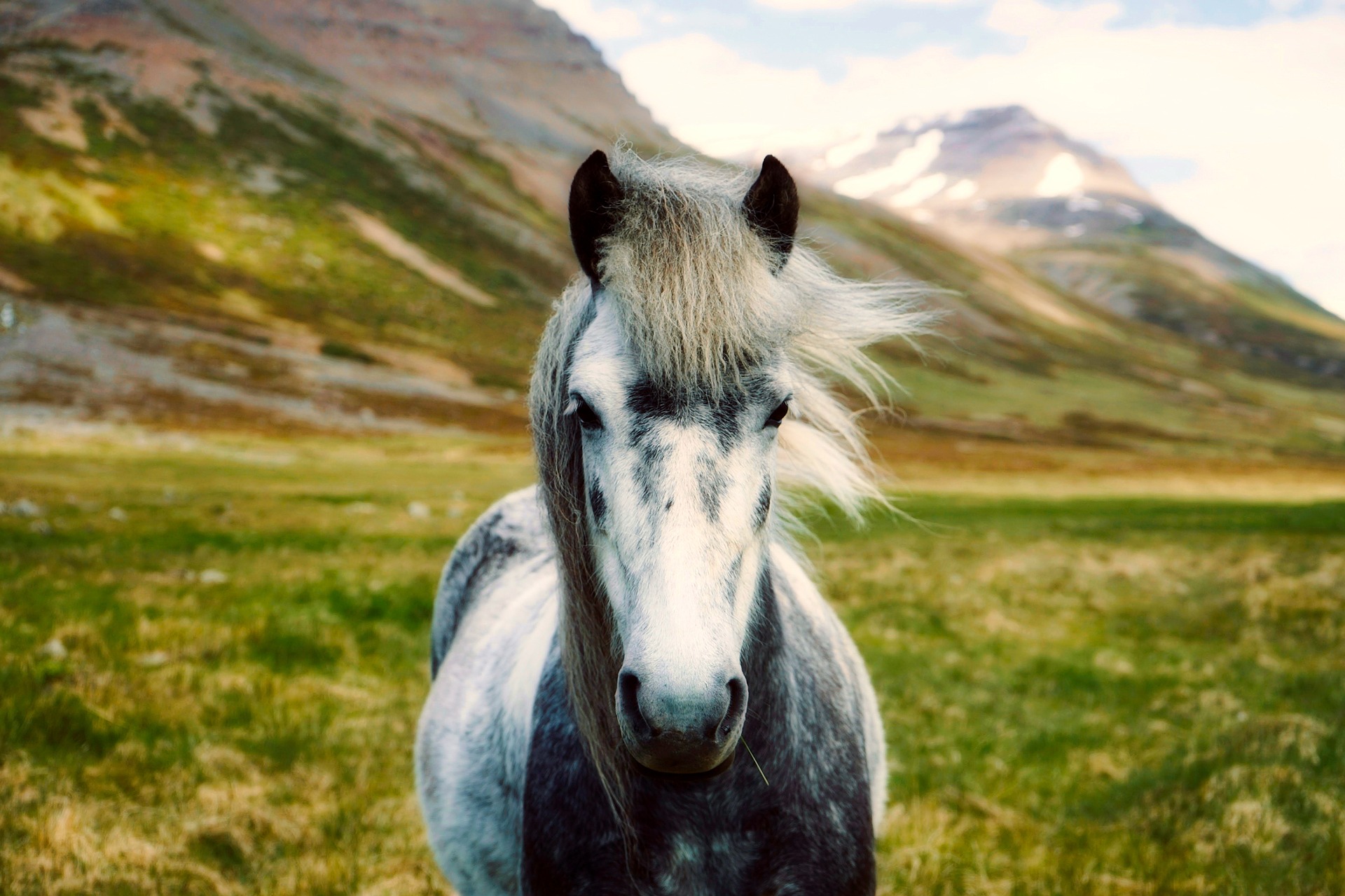 A strange and old tale is told throughout the world, passed down through the ages as it ever was. It’s the story of Sleipnir, the fastest of all horses. Shiny is his stormy-gray coat and so swift are his eight legs that he can travel through the sky and between realms. Never such a fine horse existed anywhere, not before his birth or since.

The story of Sleipnir begins in a time before time, when the world was young and the halls of Asgard newly-built. Valhalla sat vast in its emptiness, not yet filled with the souls of fallen warriors, and the gods and goddesses were just beginning to settle into the landscape of their lives.

One day a man came over the hills, accompanied by a large and powerful stallion. The man introduced himself to the Aesir as a mason, a stone-worker of no small talent, and offered the gods a deal:

“Your halls are fine and your city beautiful, but it would be all for nothing without a wall to protect it. I can build you one to withstand the mightiest armies in no more than three seasons, should you accept my services.”

“And what payment do you ask for this?” inquired Odin, who knew true skill rarely came free.

“I ask for neither wealth nor material goods, but for Freyja’s hand in marriage and the Sun and the Moon,” the mason replied.

Naturally this offer was met with great objection, especially from Freyja, who had no intention of handing herself over like some party favor. And what of the Sun and Moon? To give them up would spell disaster for the newly-created world. All the same, the Aesir needed a wall. The wild beings of Jötunheim regularly breached the boundary between worlds, Midgard, and it was unfair to rely on Thor to always protect Asgard when he had a whole world to defend. The Aesir took council to discuss what to do.

“This fellow’s clearly a fine kind of braggart,” said Loki as he languished in his seat in the council hall. “If his skill is worth the payment he asks, he should be able to build the wall single-handedly in only one winter.”

“Of course it is!” Loki replied. “No ability less than that is worth Freyja, the Sun, and the Moon. We should give him these terms and tell him if the wall isn’t finished the first day of summer, his payment is forfeit.”

It was a better idea than any other they could think of, but whether or not the mason would agree was something to be seen. Odin brought the conditions before the stone-worker, who scratched his beard in thought.

“I have only one request,” he said to the Allfather. “And that is to allow my horse, Svadilfæri, to assist me. He’s a fine horse—truly the best there is—but nothing compared to an entire crew of skilled workers.” Once again, Loki chimed in:

“Well that’s certainly not an unreasonable request,” he said. “Yes, you can have help from your horse.” The Aesir were bewildered at Loki’s change of tone, particularly Freyja, who gave him a hard look.

“Weren’t you the one who suggested he do this single-handedly in one winter, Loki?” she asked.

“Of course I was,” Loki replied. “And he’s still doing this single-handedly—you see, horses don’t have hands. Cheer up Freyja, what difference will a single horse make?” Technically speaking, Loki wasn’t wrong, and even with the help extra it was an impossible task…yet the mason was still foolish enough to agree. Better to grant the man his one condition than lose out on a deal. Perhaps Loki was onto something after all.

After the contract was sealed with many oaths, the mason wasted no time getting to work. He and Svadilfæri built throughout the day and heaved and hauled stones from the quarry by night. As the days passed, the Aesir gods marveled at both the strength and the speed of the horse and the man. Svadilfæri pulled boulders ten at a time and the mason lifted stones five times his size. By midwinter the formidable wall of Asgard was half-built. The Aesir grew concerned.

“There’s no need to worry,” Loki assured the gods. “He can’t keep this pace up forever, now with winter as long and hard as it is. The boon he began with will be a burden to him later; that I can assure you.” The Aesir nodded in agreement. The tides could always change on luck and fortune, no matter the progress made.

But the man and his horse didn’t flag in their speed, working at the same pace as ever. Winter passed. The snow retreated to the peaks of the mountains and the sun returned to shine upon the world. A huge, sturdy wall encompassed Asgard, with hardly much left to finish. With summer only three days away, he was bound to finish in the allotted time.

Freyja flew into a rage.

“This is all your fault!” she cried to Loki, pointing an accusatory finger at him. “You brought this upon us by permitting the mason to have help from his horse! Why didn’t you suspect he’d play us for fools, asking for such a thing!? This man and his steed are true to their word and work, and now you’ve cost us dearly, troublemaker!”

Loki was not moved by Freyja’s impassioned speech, let alone her accusations. He stared at the Aesir gods from where he stood, a suggestive gleam in his eyes.

“And how was I supposed to know how effective the horse would be?” he asked them. “None of us knew horses and men are capable of such feats.”

“This mess is the result of your judgement, Loki,” said Frigg in agreement, as equally unamused as Freyja. “We took oaths for this gamble. What would you have us do? Break our oaths and attack the man to stop his progress?” A wave of disgust rose through the Aesir at the thought.

“Hour or days, we need a solution,” Odin said. “Let us assemble and discuss.” And so they did. By the end of the assembly, they reached no agreement on how to stop the mason, but they did agree on one thing: If anyone should risk the dishonor of oath-breaking, it was Loki.

“That settles it,” Odin said. “Loki, you fix this, or the consequences are yours alone to bear.”

The noon sun sat high in the sky as the mason and Svadilfæri worked, both sweaty from the task yet undeterred in their resolve. However, a curious thing happened. From the woods there came a sound, and both the man and the horse broke their attention to look.

A truly astounding young mare cantered out from the growth, huffing in play and pleasure. Her coat glistened in the sunlight, its color and shine beyond compare. She tossed her long, glorious mane around her head, pausing only once to look Svadilfæri up and down with a suggestive gleam in her eyes. Pleased by what she saw, the mare resumed her dance with renewed sensuality.

The mason watched with fractured comprehension as Svadilfæri became immediately and irrecoverably undone. The stallion, normally so steadfast, bucked away his tack and cart to dash after the mare in single-minded pursuit. The female horse whinnied in delight as she took off into the woods, Svadilfæri galumphing after.

The mason took a moment to gather his disbelief before running after them, bellowing and shouting his horse’s name. But the two animals only ran farther away until they disappeared into the growth. For the rest of the afternoon and into the night the mason searched for his steed, and by the time he brought him back they were well behind on their work. For all the speed and grunting and swearing that was had after, the wall sat incomplete by the first day of summer. The stone-worker has lost his prize.

“Well mason,” Odin said, looking admirably at the wall that was built. “I must admit you’re a truly talented man, but unfortunately you fell just short of our bargain. Because of this, I’m afraid I can’t offer up Freyja, the Sun, and the Moon as you wished.”

“You don’t understand!” the mason shouted in anger. “The fates tricked me! A wild mare came out of nowhere and robbed me of my steed!” Odin frowned, stroking his beard.

“That seems terribly unlikely,” he said. “Was your horse just startled? We all know horses are very skittish creatures.”

“Are you calling me a liar, Old Man?” the mason yelled, his features and form contorting to a great and terrible size. No longer did a man stand before the Allfather, but a raging jötunn.

“Considering you now choose to make an enemy of us, despite the oath you took stating you wouldn’t,” Odin said, staring up at the wild man’s form. “I would say yes, I am calling you a liar. The deal’s off.”

Immediately Thor was called from the East, for all anyone had to do was speak his name and he would appear. He came with a loud BOOM! from the sky, smashing the hammer Mjölnir down upon the jötunn’s head and sending him careening straight down to Niflheim.

“Well now!” said Thor, after the deed was done. “What a marvelous wall you built while I was away! I’d like to give my compliments to the person who made it!”

With only a small amount left to complete, the Aesir made quick work of finishing the wall. Then they spent the following days feasting and merrymaking in the name of their new fortification and Loki’s ingenuity…wherever he was, and whatever he did to make the mason lose his bet.

Come to think of it, where was Loki? Days and weeks passed by, but no sign of Odin’s brother-by-blood could be found, until Loki finally returned nine months later. He sauntered into Asgard along with an astonishing little creature; a beautiful foal with a coat like stormy clouds and eight sprightly legs. The horse pranced affably at Loki’s side.

“Loki! Where have you been?” Odin asked at the approaching pair.

“Oh you know, around,” Loki replied, presenting Odin the foal. “But look at this: I have a gift for you!”

“What a gorgeous little horse,” Odin said, admiring the foal. “He’ll grow up to become the best and fastest of all horses; yes, that’s evident enough by the way he holds himself. It would seem his name is Sleipnir, the Swift-One.” The Allfather turned his attention back on Loki. “The mason didn’t finish the wall in time because his work was delayed. You wouldn’t happen to know anything about a mare running off with his horse, would you?”

“Oh, well that seems terribly unlikely, Odin,” he said. “Are you sure the horse wasn’t just startled? We all know horses are very skittish creatures.” Both gods glanced at Sleipnir for a moment before meeting each other’s gaze, the light of mischief in their eyes. Then they threw their heads back to laugh, and laugh they did all the way to Asgard’s stables.

True to the Allfather’s words, Sleipnir grew up to be the best and fastest of all horses. Even with ages passed, Sleipnir is still Odin’s choice steed for riding across the sky and between words, his eight legs the surest of any horse there ever was.

The Birth of Sleipnir is attested in Gylfaginning, a significant part of the Prose Edda, written by Christian lawspeaker Snorri Sturluson in 1220 c.e. My version of the story is a fanciful retelling based on this passage in Gylfaginning. I have taken creative liberties to update it for a modern, English-speaking pagan audience.

Here are events I modified, as they are told in the Edda: